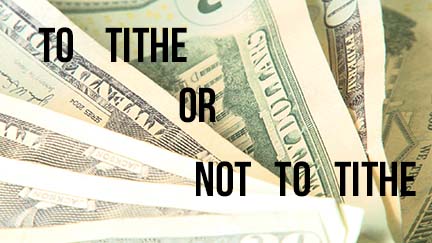 Please read the part one of this article so you an properly understand what I am trying to achieve by writing this.

Have you ever heard someone say “I no longer give a tithe of 10 %, in fact I now tithe 90%”? What is wrong with that statement? In fact as I have followed this tithe debate, this statement has been thrown around by many of the proponents of tithing, especially by Pastors trying to encourage their congregation on the validity of tithing. Examining this statement closely, we realize that proponents of tithe that say they no longer pay 10% are tacitly admitting that they no longer tithe.

It is simple! Tithe, by definition, is 10%. Anything other that 10% is not longer a tithe! A Pastor that has been giving 90% for the past eleven months has actually not been tithing for the past eleven months. Something else we can see from this example is that the word “tithe” has so entered our Christian linguistics that we use it without even thinking about its meaning. The Pastor who encourages His congregation to grow their “tithing” beyond 10% actually believes giving should not be tied to a legalistic number!

WAIT! WHAT? Let us go through the Bible!

Galatians 3:24, 25: In fact, the Law was our teacher. It was supposed to teach us until we had faith and were acceptable to God. But once a person has learned to have faith, there is no more need to have the Law as a teacher.

This is a very interesting portion of Scripture. Paul, addressing the ‘foolishness’ of the Galatians, went on to talk about the purpose of the Law. He said the Law was our teacher! In other words, there were certain things we needed to learn, there were certain attitudes that needed to be imbibed, and guess who God appointed to teach us those things – the Law! But once a person learned how to have faith, there is no more need to be under the teacher. It meant that the teacher’s work was done!

If the Law was a teacher, what was the Law of tithe supposed to teach us? Let us go back to the very beginning!

Father Abraham had a lifestyle of Faith!

Paul in trying to explain the Christian life of Faith to Gentiles, always skipped Moses all the way back to Father Abraham. This was because before Moses came with the Law, Father Abraham was living a life approved by God akin to the life Christians are called to live today. He was living a life of Faith and drawing God’s approval outside the law. What does Scripture say? “Abraham believed God, and it was credited to him as righteousness.” Romans 4:3. If we look closely at his life, we will see transferable parallels to how we ought to live today.

Now in Genesis 14:18-20, we see Abraham meeting with Melchizedek, the Priest of God most high and giving Him a tenth of all he had. Two questions arise from here:

Hebrews 7:4 tell us “Just think how great he was: Even the patriarch Abraham gave him a tenth of the plunder!” In other words, Abraham recognized the greatness of the one standing in front of Him and instinctively gave the first portion of his plunder. There was no law, no instruction, no guideline! There was just a man of Faith, having a Divine encounter and responding extraordinarily! Wow, this blows my mind really. The same thing happened to Jacob in Genesis 28:12-22. After the encounter of God in Bethel (Angels were ascending and descending on a ladder), he woke up and said “wow, God is here”. The next thing this man did was to pledge commitment to God and give a tenth of all he receives to the Lord!

We see Abraham and Jacob, without a law, without compulsion, without any promise of a blessing, responding to the revelation of God’s awesomeness by instinctively giving!

So why did Abraham and Jacob give a tenth or a tithe as we call it today? In this culture, blessings or prosperity was measured in folds, or parts. So 100 folds represents fullness. Giving a tenth was an acknowledgement of the fact that God’s blessing was full and that He deserved the first part. By the way, you also notice that Abraham and Jacob did not give to get, they were not giving to manipulate God, they were giving in response to the awesomeness they encountered and the great blessings they had received.

430 Years in Captivity is a Long Time

Imagine living under the hard whips of angry slave masters for over 400 years!

As Moses was leading Israel from bondage, he was leading a people with no culture, no morals and no experience of God. These people were not like Father Abraham at all. They had no sense or instinct for worship and reverence of God. So, God set up the law to teach them to become a people acceptable to Him. When you go through the sundry laws, you discover that some where religious, medical and legal. God was basically using the law to create guardrails to put them into a routine. The items of the law were not the main things God was focusing on, but the lifestyle the law forces! In Christ, this lifestyle should no longer be forced, it should be automatic!

What was the Law of Tithe suppose to Teach?

In Summary: God is not after your 10%. He is after the lifestyle that moves you to give!

The Law of Tithes as a tutor has taught us so many important lessons, it has shown us some of the things God really cares about. It has taught us that:

It is important to notice that the Law of tithe teaches us to personally revere and worship God, teaches us to worhsip together with others, and teaches us to as a community care for God’s workers and and the less privileged. Now like Galatians 3:23-29 tell us, If we have come to Christ, the work of the tutor is supposed to be over. This means these lessons should have been engraved on our hearts like Jeremiah 31:33 said. This mean we no longer care about percentages when talking about giving to God. The lessons of the law have been learnt and we run with the zeal, passion and generosity of Christ in meeting those needs.

Think about this: When you were learning how to ride a bike, you needed training wheels to give you balance and build your confidence; but once you learnt how to ride, you got rid of your training wheels. I see the tithe as good training wheels. Giving in percentages is a very good way to learn how to give faithfully. That is what it is meant for, to teach! But you need to know that permanent attachment to a training wheel is a problem. Your goal should be to get rid of this training wheel and express the fullness of Grace and generosity that is suppose to now be part of your lifestyle as a Christian.

So, the question “should I tithe as a Christian” is a wrong question! The right question should be “Have I learnt the lessons the Law of tithe was supposed to teach”.