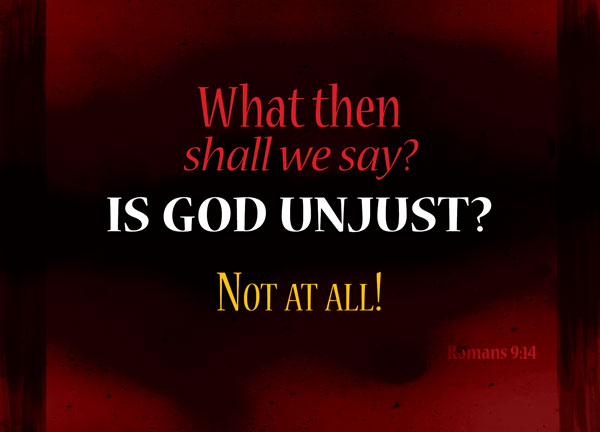 At first glance of this chapter, we come away with a God who has has the authority and choice to save whoever he wants saved and condemn whoever he wants condemned with no will of choice on the part of individuals. It has been the ‘go to’ chapter for a ‘deterministic’ theology. And to some extent it seems like that is what is going on else how can we explain vs.20, 21-23, 20, 16? They all suggest a God who, like the potter and the clay analogy’ does whatever He wants with the helpless ‘clay’. No matter how you want to quote the bible, it all comes down to one thing from our common sense: “God is unjust!” period. While we will not admit such conclusions, we can’t deny it when we come to Romans 9.
Also, the bible at the same time claims God is a ‘just God’ in vs.14. So, how can a just God give the hope of salvation to some who are no better than those He has taken such hope from? It is this final realization that causes us to ask: Is this really what Paul is saying in this chapter with all his analogies? As I would explain, it turns out we have misunderstood this chapter.

There are times where the bible is saying something totally different from what we are
assuming or reading into the text. During such times, I have often taken a step back to understand the text in context. I often ask questions like:

When questions like these are asked regarding the bible, we realize that the bible is consistent in its’ message. In studying this chapter, it is also applicable to apply some if not all of these questions to this chapter.

This is the overview of what the issue was and how Paul addressed it. Having a proper understanding of the crux of the chapter and who and how Paul went about solving the issue, let’s now delve into those verses we have erroneously taken out of context in the next article.