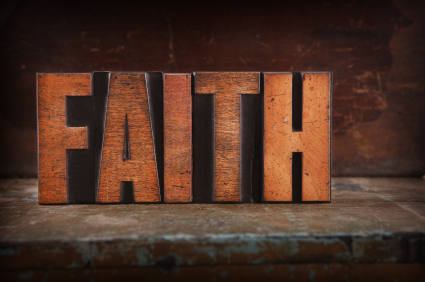 I recently had a conversion with a Christian brother about the issue of faith, lets just say I was left bothered afterwards.

He told the story of how he needed to apply for a loan which he did not qualify for. According to him, he prayed and fasted and applied a high amount of faith, went to the bank and came out with his loan approved. He attributed his success to the level of faith he had. Just wanting to be sure we had the same understanding of faith, I asked a simple question. "What if it was not the will of God for you to get the loan, would your 'faith' have made a difference"? "Yes" he cried. "With my faith, I can change the will of God".

A pastor once told the story of an interesting conversation he had with God. He said he was praying and asking God for a particular favor when the Lord stopped him and said "son, I can't grant your heart desire because it will ruin your life". He refused to take NO for an answer because he really needed this favor. So, he replied to the Lord and said "Well Lord, you have no choice. You have to grant my request. When it messes up my life, I'll run back to you". "This" said the Pastor "is faith at work. Faith enables you negotiate your way with God".

You notice from the stories above, that faith is not inanimate, it is a living force that can control the hands of God. Therefore, if you have the right amount of faith combined with a healthy dose of bravado, you can command and control God, making him do whatever you want.

This false version of faith has been popularized by the word of faith movement*. This definition promotes faith from being an immense and absolute trust in God, to a  creative force that can be possessed and used. Believers in this kind of faith would regularly misquote scripture and say "...faith calls those things that be not as though they were". Like the guy in the first story, faith can be used to override the will of God on any issue. This kind of thinking takes attention away from God and places it on the selfishness of one's desire. This kind of faith makes its owner behave like a spoiled kid in a candy shop screaming at his dad for candy saying "I want my candy and I want it now!" Like the Pastor in the story above, faith becomes a scolding cane in the hands of its bearer saying "do as you are told God".

When therefore, someone possessing this kind of faith has his prayers left unanswered, he complains and murmurs, and gets angry at God, wondering why his prayers were not answered after all, he had enough 'faith'!

The Bible however teaches a different kind of Faith. Rather than teaching that faith is a creative force, the Bible teaches that faith is an absolute trust in God. You see, we all want what we want. When we pray, we usually ask God to do all manner of things for us. Faith is trusting that God who is love will not withhold anything good from us. Praying in faith means trusting that when we ask for bread, God will not give us a stone. The Bible does not teach about a faith that attempts to overrule God. Who in the whole of Scripture would be a greater example of faith than our Lord Jesus? Like a trusty clock, Jesus had his prayers answered every time except one. The one unanswered prayer of Jesus is a great lesson in great faith.

In a time of great distress, Jesus prayed "Saying, Father, if thou be willing, remove this cup from me: nevertheless not my will, but thine, be done. Luke 22:42. This was the one time Jesus wanted something for himself. The bitterness and agony of what he was about to go through got to him. Like we do when we are faced with a situation, he prayed to the Father. He did not try to arm twist God into giving in to his request, he instead in Faith let the choice rest on God. His absolute trust was in God's love and fairness. He knew that just like his father would not give him stone when he asked for bread, he would also not grant his request for a meal of stones even if he threw a fit!

Praying tenaciously and insisting on God to do something that is in opposition to his will for you is not faith, it is mere stubbornness, extremely childish and outlandishly idolatrous. God is not a means to our ends, He should be our end. Faith does not call those things that are not as though they were, it is "...God, who quickeneth the dead and calleth those things which are not, as though they were" Romans 4:17.

*Word of Faith (also known as Word-Faith or simply Faith) is a worldwide Christian movement; it teaches that Christians can access the power of faith or fear through speech. Its distinctive teachings are found on the radio, Internet, television, and in many Christian churches.